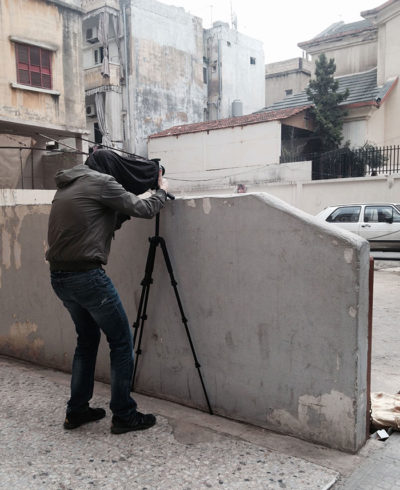 Claudio Gobbi (1971, Ancona, Italy, lives in Berlin) is an Italian artist working with photography. He grew up in Rome and has lived in Milan and Paris. He is based in Berlin since 2010. He trained in Political Sciences at the University of Rome before he decided to study photography at Riccardo Bauer Institute in Milan where he specialized under the guidance of Gabriele Basilico. He has been exhibiting internationally since 1999 in public institutions and private galleries. His work deals with cultural and political aspects of landscape and architecture as well as with an investigation of the photographic medium itself. It is characterized by a declared discontinuity of vision and a multiperspectival approach. In his long-term projects and open series he often combines his own images with collected, found or commissioned photographs. In doing so he explores issues such as cultural identity and borders, transnationality and the encounter between East and West, as well as the connections between art, architecture and cultural anthropology. In 2003 he was the recipient of the Prix Mosaïque (Centre National de l’Audiovisuel, Luxembourg) for a photographic project on the subject of Europe. In 2007 he received a grant from the Italian Ministry of Culture to be artist in residence at the Cité Internationale des Arts in Paris. In 2009 he was invited to produce a specific project for the 2nd Thessaloniki Biennale of Contemporary Art in Greece and in 2010 he was assigned to photograph the Zaha Hadid’s MAXXI Museum of XXI Century Arts in Rome. In 2016 the monograph on his work Arménie Ville was published by Hatje Cantz.